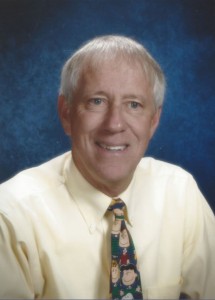 Ron arrived in San Diego, via a travel trailer, in 1949. He attended, and played baseball, at Point Loma HS, San Diego CC and the University of San Diego. Ron received his Master’s degree in Educational Administration and Ed.D while working at Francis Parker School in San Diego and Warren-Walker School in Henderson, Nevada, until his retirement in 2010.

Ron’s officiating assignments include: San Diego CIF Final featuring Paul vs. Michael Chang; working as a traveling Official for World Team Tennis and SD Friars; designated as a USTA and International Tennis Federation “Blue Badge” Certified Official; selected to officiate in over 15 Davis Cup “Ties,” the World Championship Tennis Finals and over 30 US Open Tennis Championships; selected as a Chair Umpire for the 1984 Los Angeles Olympic Games and the 1988 Seoul Olympic Games.

The things Ron is most proud of in his life are his wife Susan, their four grandchildren, their wonderful daughters Becky and Heather and well as the fact that he can say that his father was his hero and the man Ron strives to emulate on a daily basis.