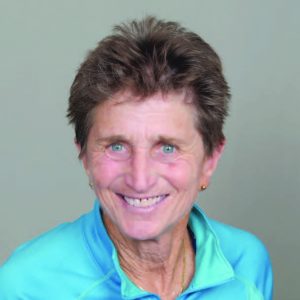 Kathryn (Katie) Moulder began her involvement in field hockey in 1965. She played throughout her four years in high school and continued her field hockey career at Temple University, graduating with a degree in physical education. Katie’s playing career included playing in sectionals, where regional clubs competed against each other over Thanksgiving weekend, now known as the National Field Hockey Festival. After graduating from college, she moved to the LA area in 1972, playing in the first ever California Cup tournament. Cal Cup today has been running for 45 years and Katie, either playing or umpiring, has never missed a year. Katie was a school teacher in Pasadena from 1974-1982 and throughout these years, she began to umpire field hockey. Katie’s umpiring career continued to blossom as she umpired in the LA area and was invited to travel with the southwest sectional field hockey team in the late 1970’s to be their umpire in Australia.

In 1992, Katie moved to San Diego and immediately started her involvement with San Diego sectional field hockey, both playing and umpiring, which resulted in her getting involved in umpiring high school field hockey in San Diego. Katie continued her umpiring career in San Diego involving herself in every field hockey event she would come across.

Katie donates her hours to umpire for free at the middle school level and various charity tournaments throughout the year. Two of the main charity tournaments Katie has been involved in since their inception are Play for Pink with all proceeds going to breast cancer research and Play for Mila with proceeds going to suicide awareness. Katie has been involved with the local San Diego field hockey umpiring association since its inception, taking on roles such as Umpire Chair, Board Member, Secretary, and Treasurer. This association later became known as the San Diego Field Hockey Officials Assoiciation (SDFHOA) in 2002, and Katie is still directly involved. Although Katie retired from playing field hockey in her early 60’s, she still umpires field hockey at every level, not only here in San Diego, but has traveled to umpire at various field hockey tournaments across the nation. Katie’s involvement and her love of field hockey. has directly affected field hockey in San Diego in the most positive way, as she has helped grow the sport here more than any umpire ever has.