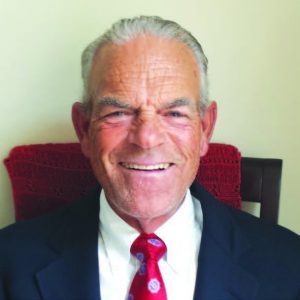 Mike is a native San Diegan, grew up in La Mesa, attended Grossmont High School participating in football, baseball and basketball and graduated in 1964. During his senior year, he enlisted in the Marine Corp.

During high school, he met and feel in love with his wife, Markay, married on June 25, 1965 and just celebrated their 52nd anniversary. They have three children, Brian, Stacy and Kristen, along with five grandchildren.

Upon his completion of four years in the Marines, they moved back to San Diego and within two weeks, Mike was hired on at your favorite utility, San Diego Gas and Electric Company and retired in 2007 as a Marketing Manager with 38 years of service.

He is a graduate of Grossmont Community College (1970) and San Diego State University (1973).

His 40 year umpiring career, starting in 1978, at the little league level, and progressed through high school, junior college and Division 1 NCAA baseball.