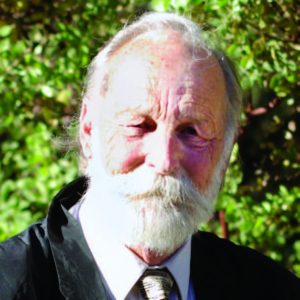 Mike was born and raised in La Mesa, falling in love with baseball watching the game of the week with Dizzy Dean and Pee Wee Reese religiously until he was old enough to start playing at La Mesa National Little League. As a junior at Grossmont High – he began coaching and umpiring at La Mesa National in the Majors and Senior’s divisions. After graduation, he continued to umpire with La Mesa National and Valley Mesa Bobby Sox Softball, plus International Girls Softball around the East County.

In 1975 after working the IGS World Series–he took an officiating break to concentrate on his career moving to Sun Valley, Idaho. Spending the next ten years
pursuing a radio career, eventually landing at KiFM. In 1986 Mike took a shot at pro baseball attending the Joe Brinkman Umpire School. Returning to San Diego, he joined the San Diego County Umpires Association, setting a goal to become the best umpire he could be.

In 1987 he presented to the SDCBUA board, a design for a uniform patch (Association logo) to better identify the County umpires from other groups working. The idea was to improve morale among members and building a more professional attitude. It was adopted unanimously by the board. With the board’s approval, support of senior members and the cooperation of high school coaches he also began a program of preseason clinics to better train on field mechanics and team work. A program that continues today.

Elected President of the Association for 3 consecutive terms beginning in 1992. Mike negotiated an improved pay scale for the sub-varsity officials, while increasing Varsity pay and guaranteeing officials input for playoffs. He served as liaison with the National Association of Sport Officials for the annual convention in San Diego in 1994, securing key note speaker Police Chief Jerry Saunders. Mike also instituted the policy of filing ejection reports with the Association, later adopted by the CIF.

From 1990 to 1995 he officiated with the San Diego County Football Officials. In his 20 plus years of umpiring, he took the field for NCAA division 1 and 2, NAIA, Junior College games, the Colt League World Series and 12 CIF finals in all divisions; in some years working over 150 games from Little Leagues to Colleges.

In 2000, Mike moved to Julian where he was reelected Association President. In 2004 he and his wife Michele Harvey bought the Julian News. Between the responsibilities of running the weekly newspaper and distance for travel, Mike ended his officiating career with the County. He continued to volunteer with Julian Youth Baseball, serving as Umpire-in-Chief from 2010 to 2015.